Several weeks ago, my husband and I had the rare experience of digging for fossils.  Thanks to the Edleman Fossil Park at Rowan University, Glassboro, NJ, people from all over the country  – and world – can find, and keep, treasures from the Cretaceous Period.  The park –  located in Mantua, NJ – was once covered by the ocean, so the marine fossils are easy to dig for and worth a family trip. 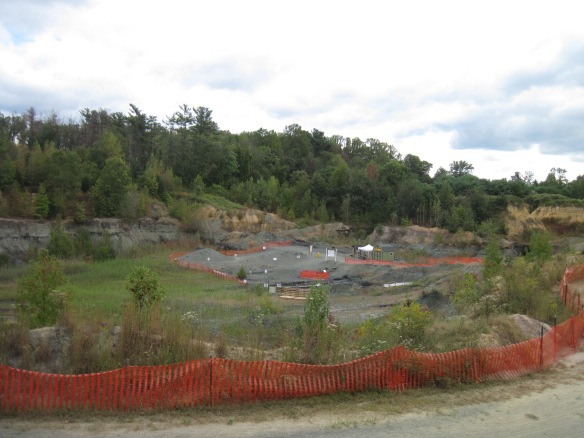 You won’t unearth dinosaurs since they were land animals, but the marine life we found was still pretty cool.  We dug for under two hours and found the remains of  oysters, brachiopods, sponges,  bacteria “poop”,   and a rare blue mineral called vivianite.  There is also a stream for shark tooth hunting.

The fossil park has two public “dig days” each year but the spots fill up fast.  More than 400 schools are on a waiting list for class trips.  But for all your little – and big – paleontologists out there, it’s a rewarding place to begin a life-long love of pre-historic things. 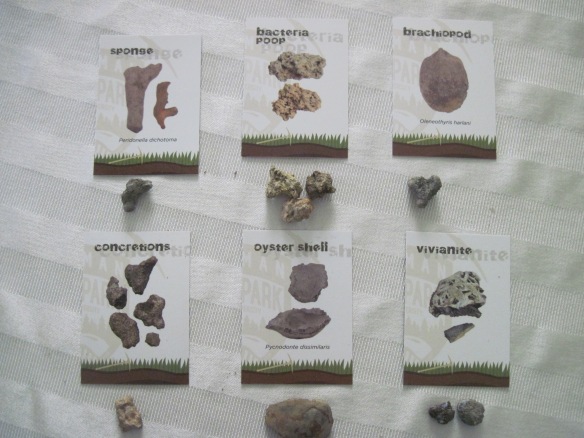 I’ve posted a few times about our efforts to help save the endangered Monarch Butterfly.  By planting milkweed, the insect population will lay eggs and produce the caterpillars that make the next generation.  While these butterflies might be attracted to other plants like the popular Butterfly Bush, they ONLY LAY EGGS ON THE MILKWEED. AND THE CATERPILLAR ONLY EATS THE LEAVES OF THIS PLANT. 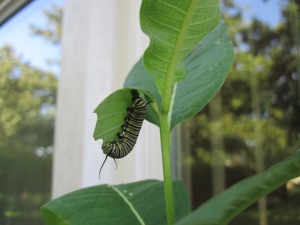 Perhaps because we’ve had such a mild fall, the last Monarch cycle occurred just a couple weeks ago.  And, I am happy to say, we “hatched” SIX butterflies this season- up from TWO last year. 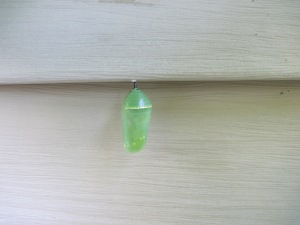 That may not seem like much, but  every bit adds to the total.

After the caterpillar is done feeding, it attaches its chrysalis underneath the siding of our house.  We went out and checked them each morning and one day…three weeks ago…we found this: 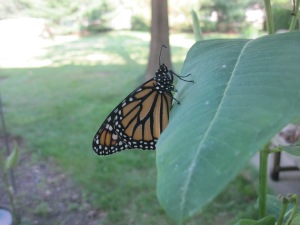 It’s a small effort, with such a beautiful reward.  Long may these lovely creatures live!

To learn about the monarch and how you can help save this endangered species and to get free milkweed seeds to plant for next year visit: http://www.livemonarch.com/free-milkweed-seeds.htm

Tomorrow is Friday the 13th.  Contrary to many people, 13 has always been a LUCKY number for me.  I was born on the 13th of March and nothing bad has ever happened to me on that day.  But there is a long, ominous history surrounding the number 13…especially when it occurs on a Friday.

Throughout most of recorded history, the number 13 has been seen as an unlucky number. If you fear the number 13, you suffer from Triskaidekaphobia.

Historically, Friday has been viewed as an unlucky day of the week as well.  Combined with 13, it’s a “double whammy” for those who are superstitious.  Maybe they’d never heard of “TGIF”.

For more fun facts about Friday the 13th, visit: http://www.holidayinsights.com/other/fridaythe13th.htm

The winner of a signed copy of Barbara DiLorenzo’s beautifully illustrated picture book RENATO AND THE LION is Claire Lordon.  Please contact me so I can pass on the information to Barbara. 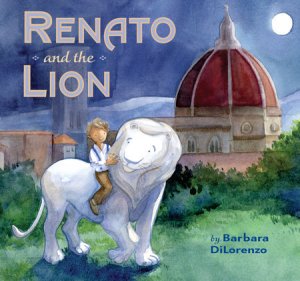 On Saturday, October 7, 2017, I attended my 4th Collingswood Book Festival as an author and this one was finally held outdoors thanks to the beautiful, sun-filled day.  And, as one of the featured authors at this year’s event, I was privileged and thrilled to talk about WHEELS OF CHANGE with many 4th and 5th graders from the local schools, as well as to reconnect with fellow authors and friends.

Here are a few  photo highlights: 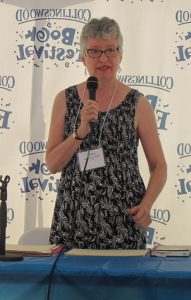 During the Wheels of Change “Book Talk” 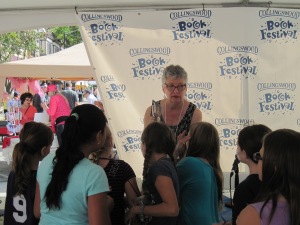 Meeting with some enthusiastic students after the book talk. 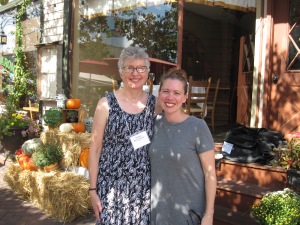 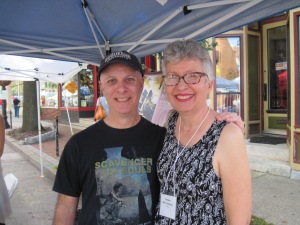 YA panel on writing fantasy. 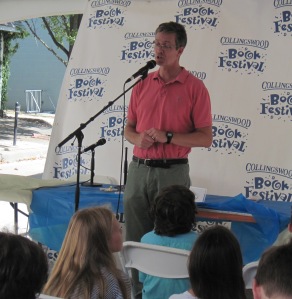 IF you missed this year’s event, mark your calendar for next year.  For a lover of books, it’s one of the best festivals around. 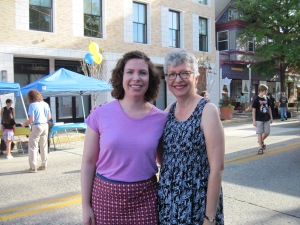 Hanging out with my daughter and “gal Friday” before the festival started.

Today is DO SOMETHING NICE DAY  and  WORLD TEACHER’S DAY.  I thought it might be special to combine the two and do something nice for a teacher.  We sometimes take our children’s teachers for granted, forgetting the dedication and hard work they put in each day to make learning possible.  We often read stories in the media about the “bad” teachers  – the ones who do little for, or maybe even harm, those in their care.  For every one of those teachers, there are hundreds who nurture and lead children on a path of success and accomplishment.

When was the last time you thanked a teacher?  A verbal thanks is good.  A letter or phone call is better.  A small token is great.  Home baked cookies, a bouquet of flowers, a cup of tea or coffee and a bagel.  A gift card for a treat at a local coffee shop or Staples..  Volunteering to help in the classroom is also great.  With tight budgets and staff cuts, many classrooms no longer have aides to assist teachers with their many jobs.  An extra pair of hands in the classroom now and then is always welcome and much appreciated by the teachers I know.  You don’t need special training to cut, paste, laminate, or assist with lesson preparations. 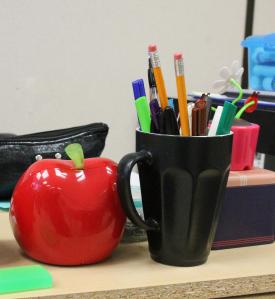 If you’re artistic, volunteer to teach an art lesson in a Kindergarten class without an art program.  Many schools no longer have libraries.  Offer to read and do storytime activities with kids.  Have musical talent?  Bring it to school.  Offer to put up a bulletin board, paint a bookshelf, make curtains for a classroom window, or teach kids to bake soft pretzels.  Share your own time and talent with your children’s teachers.  Your life and their life will be richer for it.

Congratulations to Annie Silvestro on her second picture book this year – MICE SKATING launching today. Here is the link on Amazon. See bottom of post for your invitation to Annie’s Book Launch Party. You’re all invited.

Annie has agreed to give do a book giveaway. All you have to do to get in the running is to leave a comment. Reblog, tweet, or talk about it on Facebook with a link and you will get additional chances to win. Just let me know the other things you did to share the good news, so I can put in the right amount of tickets in my basket for you. Check back to discover the winner. 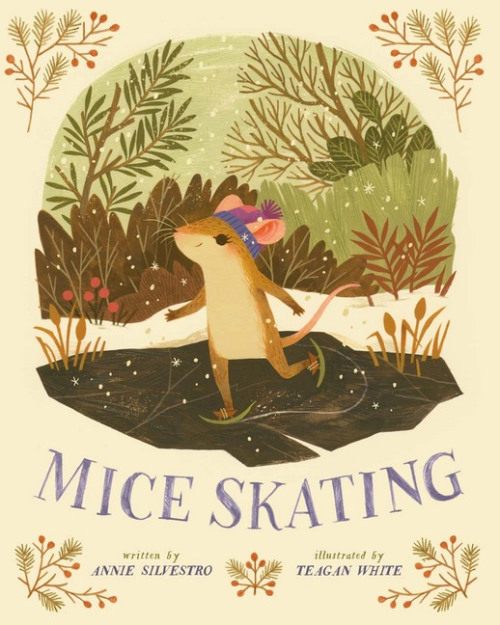 This mouse doesn’t want to stay in the house . . . even if it’s cold outside!
For most field mice, winter means burrowing down and snuggling in. But not for Lucy! She loves snow crunching under…