Thank you so much, Darlene, for inviting me to chat again on your wonderful blog. I wanted to share some details of the process I went through as I researched my non-fiction picture book SWEET DREAMS, SARAH. (Creston 2019) 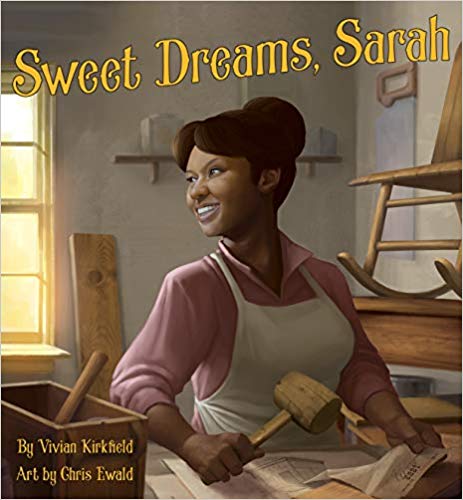 When I decided to write a nonfiction picture book story about Sarah E. Goode, I had no idea how difficult it would be to find information about her. I mean, you’d think, a person who was one of the first African American women to receive a U.S. patent would have a lot written about her, right? Especially since she’d been a slave when she was a child. Just think about that…from owned to ownership. Those words actually spurred me on as I dug deeper, trying to unearth more information.

I turned to my local librarian and she reached out to some of the larger libraries in the country. We were sure that the Chicago Public Library would have loads of stuff – after all – Sarah lived and worked and died in Chicago. But, when the librarian at the Harsh Research Collection answered our plea, here is what she said:

Wow! Your author seems to have amassed much more information than we ever dreamed there would be. We have nothing in our files on Goode and her name only comes up every Black History Month when some unlucky child has her name assigned for a report. All we’ve ever been able to lead them to is a photo of the patent and a brief blurb in a “Black Inventors” book. Essentially nothing more than can be found on the internet.

When I read her reply, I knew that I had to pursue this story because Sarah had obviously not received the recognition in life or in death that she deserved. She was a trailblazing courageous young woman who could inspire the children of today to build their own dreams.

But even though I searched high and low, there were three things I was not able to track down and verify.

Searching around the internet, I found two or three sentences repeated on just about every website that had a bit of information (often untrue) about Sarah E. Goode. Several of the websites had her photo.

There is no known photo of Sarah E. Goode. The photo that appears on several websites? I don’t know who it is, but it is definitely not Sarah.

WHERE WAS SARAH BORN?

From all the research I’ve done, I surmise that Sarah might have been born in Northern Virginia…a slave state in 1855, the year of her birth. The border of Northern Virginia runs along the southern border of Ohio…a free state in 1855. It might have made sense for Sarah’s father, a freeman, to claim that his daughter was born in Ohio where she would be considered free. And, as for Sarah claiming she was born in Toledo, Spain, again, we can only guess. Perhaps she thought if she said Spain, that would grant a bit of the exotic to her existence. I doubt we will ever know the true story.

WHAT HAPPENED TO SARAH’S BUSINESS?

By 1883, a time when most women didn’t own anything, Sarah owned a furniture store in downtown Chicago. She built the innovative cabinet bed and applied for a patent. A year later, her application was returned – DENIED. Other similar inventions had already been patented. Sarah could have given up. But she didn’t.

Carefully she changed a word here and a sentence there, explaining more about her unique mechanism, the idea that had come to her so long ago. Slipping the paperwork and a bit of her heart into the envelope, Sarah sealed her fate and sent it off.

A year later, on July 14, 1885, Sarah’s patent was granted. In 1886, her business appears in Chicago’s city listing. But sadly, by May of 1887, an advertisement in the Chicago Daily Inter-Ocean newspaper shows another vendor selling cabinet beds that look just like Sarah’s. “Manufacturer of these beds went bust and we are now the exclusive distributors.” We may never know why Sarah lost her business – illness, bad luck, or jealousy and possibly violence from business competitors—I did discover that her mother and one of her children had died the year before. She had lost two of the people she had loved the most. But there is one thing Sarah will never lose: her place in history. Sarah E. Goode will always be one of the first African American women in U.S. history to be recorded as earning a patent for her invention.

And now, the next time young students are given the name of Sarah E. Goode as a Black History Month or Women’s History Month project, there will be a book they can take out from the library, Sweet Dreams, Sarah. The author’s note, timeline of Sarah’s life and list of African American women patent holders in the back matter add rich STEM content to the book.

BIO: Writer for children—reader forever…that’s Vivian Kirkfield in five words. Her bucket list contains many more than five words – but she’s already checked off skydiving, parasailing and banana-boat riding. When she isn’t looking for ways to fall from the sky or sink under the water, she can be found writing picture books in the quaint village of Amherst, NH where the old stone library is her favorite hangout and her young grandson is her favorite board game partner. A retired kindergarten teacher with a masters in Early Childhood Education, Vivian inspires budding writers during classroom visits and shares insights with aspiring authors at conferences and on her blog, Picture Books Help Kids Soar. She is the author of Pippa’s Passover Plate (Holiday House); Four Otters Toboggan: An Animal Counting Book (Pomegranate); Sweet Dreams, Sarah (Creston Books); Making Their Voices Heard: The Inspiring Friendship of Ella Fitzgerald and Marilyn Monroe (Little Bee Books); and From Here to There: Inventions That Changed the Way the World Moves (Houghton Mifflin Harcourt). You can connect with her on her website, Facebook, Twitter, Pinterest, Instagram, Linkedin, or just about any place people with picture books are found