When I offer holiday guests a platter of fresh baked mincemeat cookies, I’ve come to expect one of two responses, happy or sorta queasy.

It’s understandable. Minced meat and cookies aren’t a famous pairing, like peanut butter and jelly, or cheese and crackers.

Mincemeat can be traced back to Medieval Times in Europe. Back then, it was a way to preserve food without refrigeration. Finely chopped lamb was mixed with dried fruits, sugar and vinegar to keep it from spoiling.

A tradition evolved that tied mincemeat pie to Christmas. The pie crust was rectangular, like the manger in Bethlehem. It was filled with mincemeat and a small replica of baby Jesus rested on the filling. A sprinkling of cinnamon, cloves and nutmeg symbolized the gifts of the Magi.

Over the years, the meat — finely chopped beef became popular — gradually began to be supplanted with preserved fruits, and sweeteners. 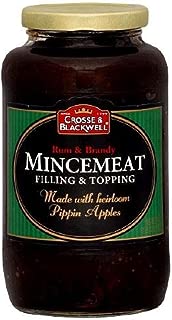 Today’s mincemeat is made mostly from preserved fruits. The brand I prefer doesn’t have a trace of meat or suet. Instead, it’s made with apples, raisins, and orange peel, mixed with corn syrup, vinegar, cornstarch, spices and salt. Some other brands still include beef and suet. Some are spiked with brandy or rum.

While I take the shortcut of prepared mincemeat, two of the cookbooks that will guide more adventurous cooks through the steps to make theirs from scratch include:

Like pumpkin pie and fruit cake, mincemeat pies, tarts and cookies have their season. It begins at Thanksgiving and ends at Christmas, although leftovers are fair game until New Year’s Eve.

My family favors this recipe:

Preheat oven to 375 degrees.  Cream butter and sugar in a mixer. Add eggs, one at a time. Whisk together dry ingredients. Add gradually to the creamed mixture. Stir in mincemeat. Drop tablespoon-sized rounds of batter on a greased baking sheet. Bake 8-10 minutes. Makes 6 dozen.

Marilyn Ostermiller is a long-time journalist, who enjoys baking for family and friends.

14 thoughts on “Mincemeat Enjoys a Storied Past, by Marilyn Ostermiller.”