Today it is my pleasure to feature a timely new book series that answers children’s questions about the pandemic. Written by Donna Marie PIPPIN PALS ARE HERO HELPERS. Here’s Donna to explain:

What prompted the writing of this timely book? 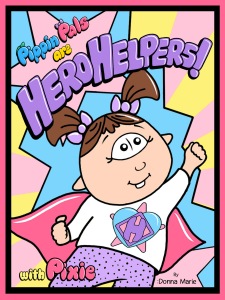 Back in March, when this pandemic really hit the U.S., I was glued to my Twitter feed and CNN; not all that much different than regular days, but with much more intensity. I was blown away by the KidLit community, from publishers on down, along with librarians and teachers when, very early on, they were offering all kinds of amazing things to families with children to help them get through the whole stay-at-home situation. I really wanted to contribute, but it took days before my foggy brain pulled up a book around 1993ish. It was called The Rainy Day. In it were ideas of what to do on a rainy day. I first thought to post the list of things to do on my blog, but nixed the idea just as quickly because it really wouldn’t offer more than what was already out there, so why waste my time? Then I thought maybe to rewrite the story’s beginning and post it on my site with a few of the dummy illustrations. Once I began writing, I ended up with an almost totally new story.

You did a perfect job of showing something scary in a safe and non-threatening way. How did you decide on the format of rhyming text?

Such high praise! Thank you, Darlene! And you’re right—it’s scary. The Rainy Day was written in rhyme (which comes naturally with most of my picture books) so I started there. I kept it in rhyme because the musical quality of it helps soften such hard subject matter, and I felt it might keep younger children more engaged. I did my best to explain, and also show through illustration, something as abstract as a virus as best I could, and depict what children are witnessing going on around them in a way they could understand. They are being asked to comply with unusual rules and much of their normal lifestyles have been upended. It’s hard enough for us adults to adjust, let alone kids!

I love how the book can be personalized so that children of color can see themselves in the pages. Explain how that came about in your illustration process.

Ah, well, THAT is why this story ended up actually becoming books and not just a blog post. As timing would have it, last fall I became aware that Shutterfly accepted unsolicited submissions. In researching, I saw how they really expanded how personalized customer’s could make their books by picking more than just their name. They could sometimes choose the main character’s gender, skin color and hair. Wanting to submit to them, I figured out a way to create a book that could include my six diverse characters. I wrote a story that would work with the personalization, but in the midst of it I found out Shutterfly closed book submissions due to administrative changes. I lost that project, BUT, as often is the case—the creative process wasn’t in vain. My having come up with a way to make the same book with interchangeable characters for diversity’s sake, when it dawned on me that I could do that digitally and could publish them as ebooks on Amazon, I was “sold.” Once I realized I had the power to execute these books, there was no stopping me! And now that I finally accomplished the publishing part, once I have promo behind me, I plan to create 2 more inclusive versions 🙂

What is your hope for this book?
Having to do things like stay physically distant, wear masks and wash hands often does not come naturally to most people, and getting kids to comply is not easy. Being compliant is not only critically important to help contain the spread of the virus, but it’s also the right thing to do. Caring about others should come easily, but doesn’t always, and children need to learn this at a young age. The seriousness of a global pandemic is certainly a time to set this example. By doing these basic, simple things we help ourselves, the people around us, and ultimately the heroic, essential workers. I’ve always felt that, especially with young children, they learn—and listen—when tasks and lessons are presented as “fun” or a “game.” Blending that with their penchant to often emulate or want to “be” Superheroes (and princesses), I believe it helps them understand that they are “heroes” by being Hero Helpers. I think it’s appealing in a way that helps reinforce these new “super power” habits we’re trying to instill.

I’d also like to encourage parents, teachers, doctors—anyone—to go to the website I created specifically to share free downloads. I originally wanted to include hand-washing and mask-wearing instructions in the book itself, but that really didn’t work for the storytelling, and couldn’t add pages for that purpose, at least not initially. That’s when I decided to create a website and know the value of having printed instructional material. You will find an array of kid-friendly, printable downloads to post anywhere from bathrooms to kitchens to bedrooms to classrooms to doctor’s offices and more, that could serve as useful tools to instruct and reinforce these habits. I made them in both 8 ½ x 11” and 11 x 17” sizes for this purpose.

PURCHASE LINKS for Amazon and Apple Books ebook and paperback versions of Pippin Pals are Hero Helpers! are on Donna’s website:  Pippin Pals are Hero Helpers! Books. Just remember—all versions are the same story; you just pick the character/s that suit the readers best. And one lucky reader can win a copy of the version of their choice by leaving a comment below. One random winner will be drawn from all who enter and announced in a later post.

Throughout her life, :Donna Marie has had many jobs and pastimes. Just to name a few: cashier, bartender, waitress, a wide array of art jobs, party planner, clown and face painter, and A.R.A. for the NJSCBWI, some of which could be fun, none of which could be classified as a passion. The one consistent thread which started as a child first as a love, then an aspiration as a young adult, and eventually becoming a serious pursuit and true passion as an adult, has been children’s literature. With the publication of Pippin Pals are Hero Helpers! her pursuit  finally became a “job” that incorporated her passion. Her sincerest hope is that these books benefit as many children as possible.

4 thoughts on “PIPPIN PALS ARE HERO HELPERS! by :Donna Marie. A New Series To Answer Kids Questions About the Pandemic. Enter to Win A Book!”