There are many of us out there who love the spine-tingly feeling we get from reading a good horror story.  I’m not talking about the grisly, slasher fare that leaves little to the imagination. I’m referring to the well-written story that takes us to a scary place with a setting too irresistible to pass up, and keeps us turning pages even when we fear what might be around the corner.

Marina Cohen (THE INN BETWEEN, A DOLL’S EYES) has written that kind of story for the middle grade audience with her new book SHADOW GRAVE. 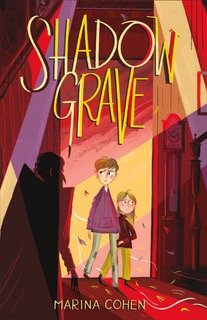 Tuck Everlasting meets The Village in this delightfully eerie middle grade novel about a boy trapped in a strange town where secrets turn deadly and the unnatural lurks in the night.

Twelve-year-old Arlo is afraid of fire, creepy TV shows, and even his own shadow―but most of all, he’s afraid of losing his mother to the disease that nearly claimed her life a year ago.

During a Thanksgiving road trip, a sudden collision with a strange beast in the middle of the road totals the family’s car, and Arlo, his mom, and his sister end up stranded in a small town.

There’s something off about Livermore. No one has a phone or a car, and the townspeople aren’t exactly friendly. Without phone service to make a call for help, the family stays at the Samuels’ mansion, but inexplicable sightings at night set Arlo on edge. When he stumbles upon a dark secret that the town’s inhabitants will kill to keep, getting out of Livermore becomes a matter of life or death.

I asked Marina how the story came about.

Being an author yourself you know that ideas come from everywhere—snippets of conversations overheard, strange facts randomly uncovered, interesting people and places one might chance upon. In fact, everything we experience goes into the compost of our imaginations and after time breaks down and eventually comes out as something (hopefully!) fresh and new and engaging. Several things went into the compost of my imagination over the years, including Natalie Babbitt’s brilliant and memorable novel, Tuck Everlasting, Frost’s poem The Road Not Taken, an amazing tiny creature called the tardigrade, and the real-life ghost town, Livermore. All of these contributed in varying degrees to what would become the backbone of my story, Shadow Grave.

Settings play such an important role in all novels, but in particular, horror novels. You are correct in that they almost take on the role of a character—in some novels, the setting is the antagonist! In my free time I enjoy researching real ghost towns, their histories, and what led to their demise. When I came across Livermore—especially one particularly gruesome fact that may or may not be true—I knew this was my setting. Even its name plays an important role in my plot. I’d driven through New Hampshire some time ago and had wanted to return and visit the remains of the town in the summer of 2020 before my novel went to edit, however, it seemed the world had other plans. Despite it being a real place, and though I did borrow pieces of its history, the Livermore in my novel is a fictional—almost mythical place.

3. You definitely achieved a creepy, yet realistic setting. It really drew me in from the first page. What are three things readers should know about the main character and his sister?

Arlo has had a rough year leading up to the start of this novel. His mother was diagnosed with cancer and though the outcome was positive the experience left him changed—a more muted and anxious individual. Though he follows the series Zombie Army of Darkness because all his friends do, he much prefers the Nature Channel. He’s both fearful and fierce, but his strength lies in his calm and thoughtful manner, while his sister, Lola, can be brash and bold. Arlo follows rules while Lola likes to break them.

4. They are the perfect foils for such a story. Your choice of words and metaphors paint such vivid pictures and really set the tone for this creepy story. Tell us a bit about your writing process and how you chose to tell the story.

Since the plots of my novels tend to be quite creepy it’s important for me to establish a creepy tone. Like music which uses dissonance and irregular rhythms to create an unsettled feeling, I like to paint pictures that are slightly askew, tilting the world and keeping my readers off-balance and unsure. I write as though I’m seeing my story unfold as a film before my eyes so I lean—perhaps too heavily at times—on the visual.

5. I fell in love with your language and word choices. One of my favorite passages…

There are so many lovely descriptions like that.  What else would you like us to know about this story?

Though this novel is primarily intended to do what horror novels should—entertain while delivering chills and spine-tingling thrills—I hope this story will leave readers with some very important life questions to ponder.

Currently I’m working on another creepy middle-grade—this one with sci-fi undertones.

Marina is giving away one signed copy of this book to a reader chosen at random. Leave a comment if you’d like to enter. If you share the post on social media, let me know so I can give you a second chance to win.

Marina Cohen is an elementary school teacher and author of several middle grade books including The Inn Between, The Doll’s Eye, A Box of Bones, and Shadow Grave. Her novels have been nominated for several awards in both the US and Canada.

12 thoughts on “SHADOW GRAVE: An Interview With MG Horror Author Marina Cohen + A chance to win a copy”