Legendary lumberjack Paul Bunyan emerged as a folk hero during the late 1800s. To commemorate his storied exploits, June 28 has been designated National Paul Bunyan Day.

Akeley, Minnesota, which claims to be the birthplace of this mythical fellow, will present its 73rd Annual Paul Bunyan Days June 24-26. Festivities include dancing, a pancake breakfast, cake walk and horseshoe tournament. The centerpiece is a statue of the gentle giant kneeling with a shovel (akeleymn.com)

The legend began in the late 1800s, as French-Canadian lumberjacks told imaginative stories of Paul’s prowess around the evening campfire. Those tall tales traveled south into the forests of Washington, Oregon, and other northern border states.With each retelling, they grew more outlandish.

Some historians believe the legend of Paul Bunyan was based on a real person — a French Canadian logger named Fabian Fournier, who moved to Michigan after the Civil War, attracted by high-paying logging jobs. Fournier was said to stand head and shoulders above the average American male and was brawny.

Those tales credit Paul Bunyan, along with his outsized companion, Babe the Blue Ox, with creating the Grand Canyon by dragging his hefty axe through Arizona for more than 200 miles. It also has been said his footprints filled with rain to create Minnesota’s 10,000 lakes. It is even postulated he single-handedly created Mount Hood, Oregon’s tallest peak, by piling rocks to extinguish a campfire.

Several statues may be the reason Paul Bunyan continues to be popular.

Paul and Babe have stood on the shore of Lake Bemidji, in Minnesota ever since their statues were erected there during Bemidji’s 1937 Winter Carnival. He stands 18 feet tall, wearing a red and blue checked shirt, and blue jeans. Babe is 10-feet tall.

Other places to see statues of Paul and Babe include:

Marilyn Ostermiller is a long-time journalist who also writes stories for children.

Ah Summer! There is so much about this time of year that brings out poetry, curiosity and a sense that anything is possible. When the kids get restless and itchy, take a break from video games and household routines and explore the natural world. To make it a more interesting adventure, become Naturalists and record the days observations and sightings. You can do this and still be faithful to social distancing and keeping one another safe. All you need is the following, all of which will fit in a backpack:

1. A pair of binoculars for zooming in on birds or other elusive wildlife. A magnifying glass for closeups of insects and plant life.

2. A Field Guide of insects and birds of North America.  There are many excellent ones you can borrow from a local library or download onto your Kindle or iphone. You can track and input what birds you see on Cornell University’s Lab of Ornithology.   http://www.birds.cornell.edu  or by downloading the eBird app.

3. A journal or notebook will help you record sights, sounds, names of animals and plants you discover, and details to use in writing a story or drawing a picture when you get back home.

Try an outing at different times of day. What is awake in the early morning hours may be totally different from what is active mid day or at sunset. If you’re having difficulty finding “critters”, be still and listen to the sounds of nature. This stillness often leads to amazing discoveries. It will definitely bring you peace and calm your stress. If you’re near water, turn over some rocks at the water’s edge. There are many hatching insects under them to marvel at.

And, like every good naturalist, remember to leave only footprints, and take only pictures and memories, and bring back any trash left behind by the human animal, so we can enjoy the natural world for years to come.

We are ALL interconnected and part of the chain that feeds and sustains life on earth. Wondering how you can help protect the most vulnerable critters on our planet? There are FIVE simple things all of us can do to help make a difference for the creatures who share the earth with us.

1. Bee populations are disappearing, which effects food crops around the world. Help LOCAL HIVES by adding a “bee bath” to your backyard. Fill a shallow dish or birdbath with water and pebbles or marbles to welcome these pollinators into your garden.

2. You can help protect CORAL REEFS by replacing your regular sunscreen for one that does not contain OXYBENZONE. This ingredient damages the delicate reefs.

3. I’ve mentioned this one on numerous posts: FEED MONARCH BUTTERFLIES by planting MILKWEED in your garden. This is the only plant these endangered creatures lay their eggs on and the caterpillars eat. You can get get milkweed seeds in your local National Wildlife Federation office.  http://www.nationalwildlifefederation.org

Milkweed from my garden. Bonus: it also attracts bees.

4. Eat seafood that is sustainably caught and protect whales and dolphins from getting trapped in fishing nets. Download the Seafood Watch app to identify businesses that serve and sell sustainably sourced seafood.

5. Help the endangered Sumatran tiger from losing its habitat to coffee growers. Make sure your brew is Rainforest Alliance certified. This means the beans are grown  and harvested in a sustainable, animal-friendly way.

Summer vacation is here!  While your children enjoy a break from school, you still want to make sure they are active and spending time in constructive pursuits instead of vegging out in front of the TV or computer.  Trips to parks and playgrounds, lakes and beaches, are a great way to enjoy the outdoors.  For days when it is too hot to go outside, or for times when quiet activity is preferred, there are some great sites for summer crafts.

The Long Thread offers 50 Summer Crafts for kids of all ages including Stone Dolls, Recycled Crayons, and Fairy Wings.

Try the awesome crafts for kids of all ages and abilities on the HAPPINESS IS HOMEMADE  site. No special skills or tools are required. 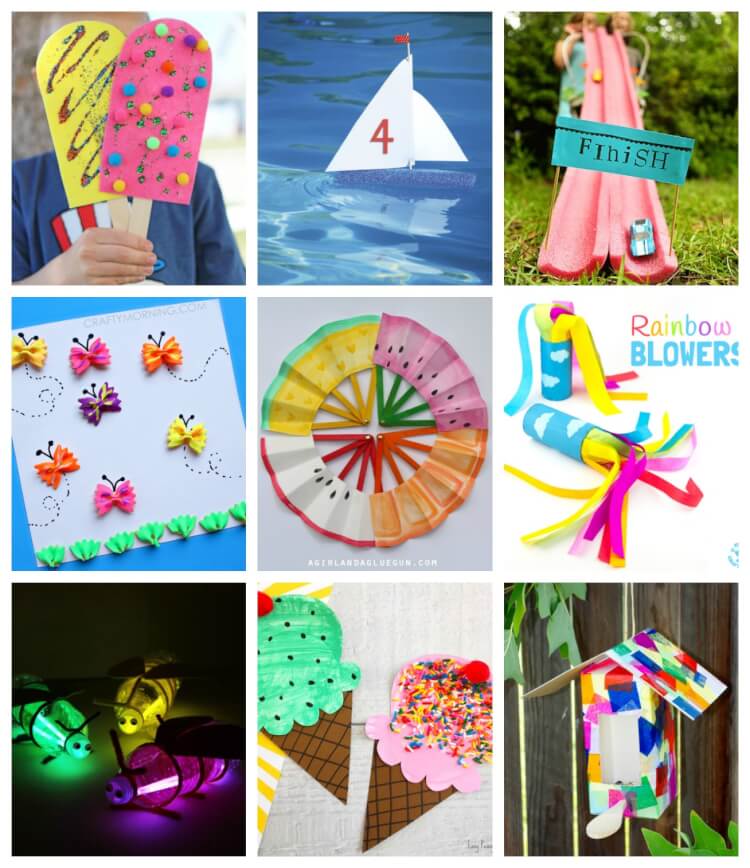 Finally,  check out the RED TED site for videos on some amazing crafts that will keep your children entertained all summer long.  http://www.redtedart.com

I haven’t been able to find a word that rhymes with RHUBARB. But, I have found some interesting facts about this unique vegetable (no, it isn’t a fruit). And I have also found something that goes really well with rhubarb…strawberries.

Today, June 9, 2022 is NATIONAL RHUBARB PIE DAY. To celebrate this tasty and often overlooked wonder of the vegetable world, I am sharing a favorite recipe for STRAWBERRY RHUBARB CRISP.

First, here are a few tidbits about this amazing vegetable. Facts are taken from the website: https://laidbackgardener.blog/2021/05/19/17-fun-facts-about-rhubarb/

If you’ve never tasted rhubarb, a good way to try it is mixed with another fruit such as the strawberries in this recipe. I prefer my rhubarb on the tart side, so I only add a tablespoon or two of sugar to the fruit mix.

SERVED WITH A SCOOP OF VANILLA ICE CREAM OR GREEK YOGURT, THIS IS A TREAT FOR THE TASTE BUDS.

What’s your favorite rhubarb recipe? I’d love to hear it…always on the lookout for more ways to enjoy this garden delight.