1. What led you to a career in writing for children?
Writing for children was definitely not part of the plan when I was younger and thinking about careers. But after having kids I started getting several ideas for picture books, usually due to what my kids would say and do. Eventually my wife grew tired of me saying “man that would make a great picture book”, and told me to sit down and write it! Once Mighty Media picked up my first Monster & Me story and decided to turn it into a series I knew I was onto something good. Though it wasn’t until I moved to New Jersey that I decided to try this writing thing full time. It’s still up in the air whether or not me being a full time writer will stick, but I figured I’d give it a shot.

This is a story as old as time itself. Actually it’s only about 3 yrs old but I was trying to be dramatic. When I was driving my daughter to daycare she was playing with her dolls in the back seat when for some reason she said, “my monster needs a haircut”. Which I thought was the greatest line I ever heard. By the time I dropped her off and got to work I had half the story written in my head. Once I had the first one complete, I started getting more ideas what Monster might need based on what any kid might need. Whether it’s a costume for Halloween or an apron to cook in, the topics are endless. 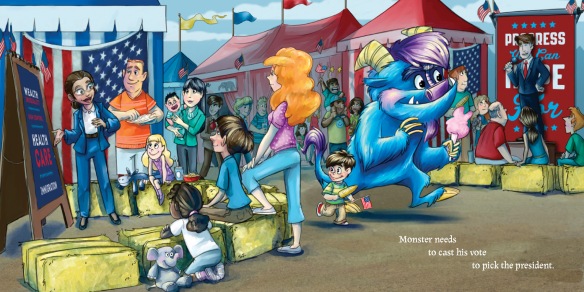 3. If you could be a monster, what kind would you be and what would you need?

4. Tell us a bit about your writing process.

When ever I get the urge, or when I have the time I am either writing or revising. I have no specified time or place. In fact, here I am writing the answers to these interview questions. 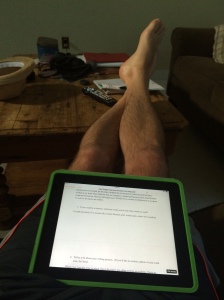 And then here I am writing a new story.
Looking at these pictures, I guess as long as I can put my feet up I’m in my writing spot.

5. Your latest book, SEAVER THE WEAVER is about an amazing spider who thinks “outside the web”. Where did you get the idea for it?
My brother in law and his wife had an orb spider living outside their patio door which they named Seaver. I thought it was a great name but at the time didn’t have a story to go with it. Later that summer I was working in the yard and I noticed about six big orb spiders all sitting in their own webs, one of which was a bit broken and no longer looking very orbish. That’s when I got the idea of Seaver not wanting to weave circular shapes and the story took shape, no pun intended, from there.

6. What would readers be surprised to know about you? What’s the most amazing thing that’s happened to you since you became a PB writer?
The most amazing thing that has happened to me as a picture book writer happened right out of the shoot, and that was signing my very first story as a series. Things like that don’t normally happen to no name newbies like myself. In fact when I first received the letter saying they loved my story and would I like to write more of them I thought it was a scam. That some how I missed something when I researched – at the time Scarletta – now Mighty Media. Turns out I didn’t miss anything and Mighty Media is a fantastic publisher!

What would readers be surprised about knowing about me? I guess that I have dyslexia, am a horrible speller and I hated reading when I was a kid. Luckily I didn’t let any of that get in the way when I decided to start writing.

At ALA San Fransisco 2015: Where I had the pleasure of meeting fellow NJ author, Paul Czajac.

You can learn more about Paul, his books and Mighty Media Press at:

Here is a link to the Campaign Press Kit for MONSTER NEEDS YOUR VOTE, the newest book in the Monster series.